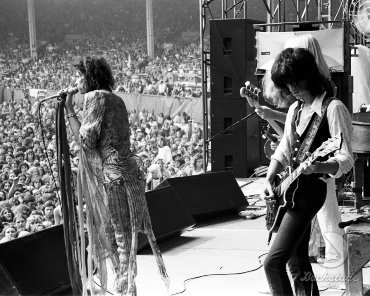 The Aerosmith that shipped off to tour North America in early 1979 represented, more so than a reinvigorated, galvanized musical entity celebrating its survival in the face of stupidity, a very fortunate group of musicians who were sufficiently conscious to appear before paying crowds. Having consumed a lifetime’s worth of drugs and other potentially undiscovered substances during the sessions for 1977’s Draw the Line, America’s champions were found relatively intact at the outset of 1979. Related for posterity in Walk This Way, the ordeals of Joe Perry’s final days with the band stemmed more from the contention of those not paid to perform in Aerosmith than artistic differences or even the mounting personal discord between the guitarist and Steven Tyler, which had not yet stymied Aerosmith’s professional career. However, the sessions for the group’s sixth studio album, to be known as Night in the Ruts, proceeded as efficiently as ever, and the band gave in to financial necessity in embarking upon yet another tour to fund the stalling project.

Wary of revisiting the exhaustion that had set in following the extensive 1977-78 touring, the group wisely opted for intermittent appearances at major festivals in April and July prior to any large-scale undertaking. Accordingly, the band got itself together enough to provide solid (or at least uninterrupted) shows and, perhaps due to the lack of an alternative, may have fulfilled its obligations more consistently than in 1978 had sentiments not taken a turn for the worse. With Joe Perry’s departure on July 28, 1979, whatever vestiges of artistic promise the group had left vanished, undoing all of the work done in 1979 up to that point. Though Aerosmith’s collapse might have been necessary for the health of all involved and the possibility of professional longevity, the decay process did manage to spawn some fine moments from the original line-up.

Despite the scarcity* of recordings from Aerosmith’s 1979 tour, the existing record suggests that the decision to pace themselves worked out quite well for all five musicians. The majority of Aerosmith’s performance at the July 21, 1979 “Monsters of Rock” bill–part of Oakland’s annual Day on the Green shows– survives as an above-average video-sourced tape accompanied by some invaluable footage. Partially shot from stage left (Mr. Perry’s side), the film was liberated from Bill Graham’s archives and marks the only substantial footage of the band from 1979. Though seen here only a week shy of Joe Perry’s fabled departure following the “World Series of Rock” show in Cleveland, the group is in stellar form and incorporates several numbers from the then-unreleased Night in the Ruts album. Heading a lineup that included a near-cultural icon Ted Nugent, a near-superstardom AC/DC, and a near-commercially viable Frank Marino and Mahogany Rush, Aerosmith legitimately rises to the occasion for a compelling performance sporting (save the absence of “Dream On”) quite an attractive set list. Tyler gives some of his best vocal performances of the 1978-9 tours, and the Whitford/Perry team is in great form. Strong renditions of “Seasons of Wither” and “Lord of the Thighs”, an advance airing of the unfinished “Bone to Bone”, Joe Perry’s wailing wah-wah blues on “Reefer Head Woman”, and a version of The Yardbirds‘ incendiary “Think About It” distinguish a very satisfying concert. The full 70-minute video is posted separately alongside the individual tracks on YouTube, but some personal favorites have been included below.

NIGHT IN THE RUTS

The final product Night in the Ruts saw release late in 1979 and, though perhaps unnecessary, the album actually had more redeeming qualities than it deserved. Joe Perry’s withdrawal from the band only halfway through the recording process remains, despite Brad Whitford and the newly-conscripted Jimmy Crespo’s best efforts, noticeable at times, but for the most part it seems the band overcame its troubles in the studio nearly as well as on stage that year. Light on original material, the band leaned on the covers of “Reefer Head Woman”, “Think About It”, and The Shangri-Las’ unparalleled “Remember (Walking in the Sand)”. Though “Remember” may have been a less obvious inspiration to Aerosmith than the first two songs–critics evidently interpreted this as justification for dismissing the recording altogether–Tyler had carried a life-long appreciation for Mary Weiss (who appears on this version as well) and The Shangri-Las and makes every effort to show it. Aerosmith’s version may not surpass the original, but the band succeeds in adapting it for hard rock and adds a beautifully-composed, brief solo section that fits the track seamlessly. Among the originals, “Bone to Bone (Coney Island Whitefish Boy)” represents by far the strongest cut. As convincing as anything on the group’s first five albums, the track features the strongest riff since Rocks and excellent group play and, coming directly after “Reefer Head Woman”, gives Perry yet another moment to shine with an extended solo break. Tyler’s work, along with that of “Remember”, also constitutes a personal best on the album. While it should be noted that nothing on Night in the Ruts is “bad”, the rest of the album does not quite reach the level of these four recordings. “Cheese Cake” comes closest with a heavy slide showcase, while “Three Mile Smile” and “Chiquita” are enjoyable but less distinctive. “No Surprize” has found favor among fans, but this is due almost exclusively to Tyler’s lyrics, which recount the group’s history, rather than the music. Functioning solely as a platform for the lyrics, the music remains static, lacking even substantial fills from the guitars or drums. Nevertheless, Night in the Ruts makes it through Tyler’s writer’s block, Perry’s departure, and less prominent original material to provide a relatively strong and stylistically-varied final statement from Aerosmith in the 1970s.

*Note: The April 8 performance at the California World Music Festival exists on a rough if not hostile audience recording, while the enjoyable July 2 Toronto show can be found on a more agreeable tape; only the last third of the April 14 set in Orlando (during which Ted Nugent joined the band for Chuck Berry’s “Carol”) is available on tape. Brief news coverage of the CA stop includes excerpts from “Train Kept A Rollin”, “S.O.S. (Too Bad)”, and “Mama Kin” in marginally better quality and interviews with Tyler and Perry, though little more can be gleaned as to the show’s artistic merit aside from the fact that the group sounds fine for these few minutes and everyone remains upright. J.J. Jackson narrates and turns up for a few seconds to bookend the segment. Joe Perry’s final appearance with Aerosmith in 1979, the July 28 Cleveland show, was by all accounts as convincing a show as the group had put on in years, and hopefully a recording will surface to corroborate this.