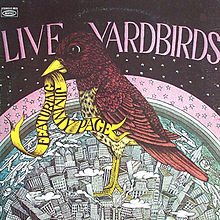 UPDATE: Yardbirds ’68, which includes the remixed 1968 Live Yardbirds (Anderson Theatre) concert and CBS Studios recordings, is set for a November 5 release. It is available for pre-order on CD and 180-gram vinyl now exclusively through JimmyPage.com.

“Just heard some new mixes of Yardbirds`tracks from 1968 plus a new mix of a famous concert from the same time – sounds great!”

Released without authorization in 1971 in the wake of Led Zeppelin’s ascent, the album was withdrawn shortly thereafter due to Page’s thoroughly justifiable threat of legal action. Insufficiently recorded–the engineers evidently felt Jim McCarty’s drums required only one microphone suspended above the kit and failed to fully record Page’s effect treatments–at Manhattan’s Anderson Theatre on March 30, 1968, Epic Records infamously overdubbed cocktail lounge sound effects (clinking glasses and cutlery, faint conversations, etc.) throughout and, most egregiously, inordinately loud cheers and applause sourced from bullfights over Page’s solos in an attempt to compensate. McCarty clarified in the comments section that the disturbances had at last been removed.

Despite the ill-advised tampering and commercial withdrawal, the record of course survived through the grace of unofficial channels and remains one of only several professionally-recorded live documents from Page’s nearly two-year tenure with the group. Though conservative in length and improvisation–more accurate, complete representations of the band’s unprecedented approach during its final tour can be found on the deeply flawed but listenable Shrine Auditorium and Fillmore West audience tapes, Live Yardbirds offers a scintillating Page performance that exemplifies the extent to which his innovative, virtuosic ardor had developed The Yardbirds into one of the world’s heaviest, most “progressive” bands and marks a precursor to his efforts with Led Zeppelin only six months later. Page’s breadth and versatility are fully on display with the inclusion of the fleet, “exotic” showcase “White Summer”, the slide-laden blues “Drinking Muddy Water”, an agonizing “You’re a Better Man Than I”, and of course the burgeoning “Dazed and Confused”. His 11+ minute exhibition on the closing “I’m a Man” incorporates every facet of the sound he had cultivated by 1968, including wah-wah, fuzz tone (which Page, through Roger Mayer, had refined and popularized earlier in the decade), bowing, technically impressive and varied improvisatory soloing, and the “light and shade” dramatics that would come to govern rock, and features excellent interplay with Relf’s blaring harmonica and the rhythmic propulsion of McCarty and Dreja. Additionally, the studio material will include The Yardbirds’ arrangement of “Dazed and Confused” and originals “Avron Knows” and “Spanish Blood”, among others. Truly one of the greatest releases in recent decades awaits and should intrigue at least as a historical landmark regardless of one’s tastes.

The rending version of “You’re a Better Man than I”, in which Page tries out many of the figures that would become commonplace in the similarly-keyed live versions of “Immigrant Song” and “Over the Hills and Far Away”, from the 1971 release is included below: