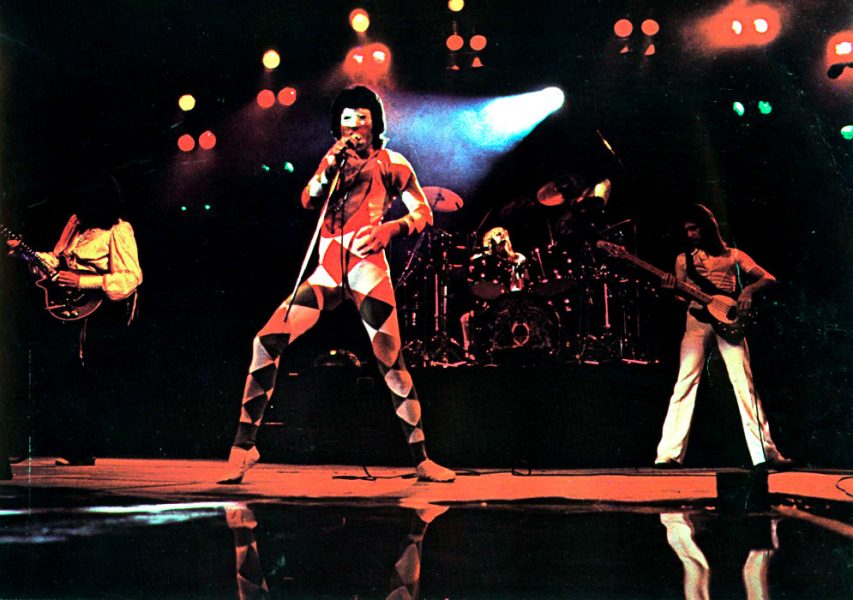 Drifting in on the adulation of the 1977 A Day at the Races tour, its most successful yet, Queen closed out a six month jaunt with a pair of June dates at London’s Earl’s Court Exhibition Centre. Replete with a crown-shaped stage setup, augmented pyrotechnics and lighting, and video screens on either side of the stage (a la Led Zeppelin‘s 1975 residency), the shows undoubtedly represented the pinnacle of Queen’s performing career and, in conjunction with the News of the World release in October, ushered the band into the realm of superstardom.

Riveting all around, the shows see consistently strong contributions from Mercury and May, who push themselves on main set pieces like the devastating “White Man” and ascendant “Brighton Rock”, respectively. The set list, though by the end of 1977 nearly devoid of material from the band’s earliest days (save the inexorable “Keep Yourself Alive”), fortunately includes “Liar” and “Doing All Right” from the 1973 debut and the glowering, grandiose “White Queen (As it Began)” and Mercury-penned fan favorite “Ogre Battle” from 1974’s Queen II. A healthy dose of Sheer Heart Attack material remains as well, though the days of “Stone Cold Crazy” were numbered. The group also elects to revive the instrumental “Procession” (originally dropped after the 1976 Australian tour) as the introductory fanfare for both nights before discarding it, never to be heard from again; nevertheless, the anticipatory effect does not hurt. The second encore of the 1950s rock n’ roll medley rightly closes each night out with a nod to everyone’s inspiration for picking up an instrument.

“In the Lap of the Gods…Revisited”, meanwhile, enjoys its final, resplendent moment as the culminating anthem of the set, to be succeeded of course by “We Will Rock You”/”We Are the Champions”, and regrettably vanishes from the live setting until being reclaimed nine years later to the day for the European summer tour in support of A Kind of Magic. Superb performances overall, the Earl’s Court shows have remained seminal entries in Queen’s history surpassed in fame but rarely in substance.

The first night is unofficially available in its entirety in professional-quality video and audio, while the second night circulates as incomplete (but superior) footage. Excerpts, remastered and edited, from both have been conceded to the public during the Absolute Greatest compilation release and studio album reissues, though precedent for years suggested that the only full-length, professionally-shot product to emerge would be from the 1980s. However, the successive releases of the multi-disc album/film Live at the Rainbow ’74 and A Night at the Odeon–Hammersmith 1975 in recent years lent credence to the notion that at least one of the Earl’s Court shows, or perhaps even the Houston stop from the News of the World tour, might soon constitute the first legitimate, commercial live document from 1977. The announcement of a 40th Anniversary expanded edition of the News of the World album (due in November) further stokes speculation as to an impending release. Hopefully, the occasion will help represent a sorely neglected era from Queen’s live history and restore faith in what are likely the group’s best, most prolific years.

UPDATE: The Queen organization decided on neither option.

Two of the heaviest numbers performed, A Day at the Races‘ “White Man” and Queen II’s “White Queen (As it Began)”, are included below: