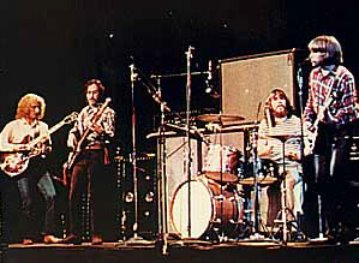 Creedence Clearwater Revival, though one of the most commercially and artistically successful acts of the late 1960s and early 1970s, failed to release a live album during its initial four-piece run from 1968 to 1970. However dominated in the studio by John Fogerty’s near-unparalleled songwriting prowess and efficiency, CCR distinguished itself as a disciplined live act that saw solid input from each member. Propelled by a vastly underrated and contributive rhythm section in Stu Cook (bass) and Doug Clifford (drums), the group shed its undeniable three-minute AM appeal in the live setting with a willingness to venture off into surging jams. Aided by Fogerty’s infamously meticulous approach to rehearsals, the band maintained greater focus and momentum than many of its Bay Area contemporaries and still provided the guitarist with ample opportunity for improvisational lead work.

Criminally, this aspect of the band’s sound did not see commercial documentation until 1973’s “posthumous” Live in Europe; no portion of the group’s professionally-filmed set at Woodstock was released until an excerpted inclusion found its way onto 1994’s Woodstock: Three Days of Peace and Music. Recorded following Tom Fogerty’s late-1970 departure from the band, the double album fails to adequately or (despite its additional disc) comprehensively capture CCR as a live entity. John Fogerty, accorded even more duties without a rhythm guitarist, attempts to compensate with increasingly-heavy distortion that neither benefits the performance nor fits the mood originally conveyed on lighter, warmer cuts such as “Proud Mary” and “Bad Moon Rising”. His personal contributions, encompassing vocals, lead and rhythm guitar, and wailing harmonica, remain stellar (as do those of his bandmates), but the recordings betray the difficulties of having to replicate former successes as a trio.

It was not until 1980 that recordings from the four-man incarnation of CCR were released, as Fantasy Records issued the group’s January 31, 1970 performance from the Oakland Coliseum in its entirety under the title of The Concert.  Playing in effect to a hometown crowd, the group receives a rapturous welcome and proceeds to deliver tight, inspired renditions of its recent hits. The set highlights the band’s most popular work and stands as a more accomplished undertaking than Live in Europe but cannot be considered definitive either. Limited in running time (not quite 50 minutes) as a faithful document of the Oakland show, The Concert condenses the group’s chart presence into a formidable set list yet does not allow for CCR’s lengthier, instrumental excursions. Save the closing “Keep On Chooglin”, none of the looser jams that saw CCR push its collective talents or earlier “album tracks” make the final LP. Such material would have to wait another thirty years to see the light of day. Released, along with most of the Live in Europe material, across the 40th Anniversary expanded editions of CCR’s studio albums, the partial FM broadcast/soundboard from a March 14, 1969 Fillmore West stop at last provided a nearly twelve-minute take on “Suzie Q” (traditionally the most reliable source for jamming), the nine minute, previously-unknown blues exercise “Crazy Otto”, and Wilson Pickett’s “Ninety-Nine and a Half (Won’t Do)”. Bayou Country‘s “Bootleg”, not found on any CCR live album, and “Proud Mary” from the broadcast remain unreleased. As a product, The Concert is ideal and certainly not disappointing, but it does not give the on-stage force that was CCR the full treatment.

The most satisfying recordings of Creedence Clearwater Revival in action remain those coming by way of unofficial channels, as noted below.

UPDATE: Audio of CCR’s full set at Woodstock was officially released in 2019 as Live at Woodstock, a vibrant document which happens to address many of the issues listed above and certainly lends a sense of fulfillment to the group’s live output.