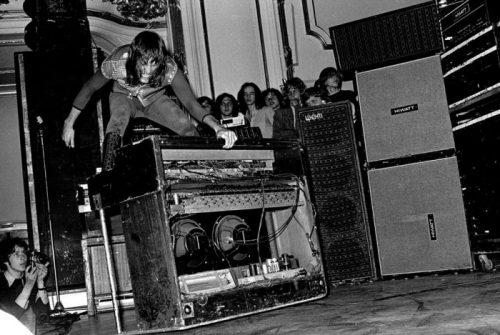 Released on Emerson, Lake & and Palmer‘s eponymous debut album (1970), “Knife Edge” successfully reconciled the group’s classical interests and irrepressible virtuosity with a brutal hard rock composition. The opening chord blasts recall the album’s first track, “The Barbarian”, but the song ultimately develops into its own, complete work. Contrary to the almost parodic heaviness and blurred wailing in “The Barbarian”, “Knife Edge” retains a tight structure that still progresses through several moods (or, at the very least, degrees of rage) before expiring.

Lake doubles his simmering bass line with a fluid vocal and glowering lyrics worthy of the title. The verses alternate with a somewhat jauntier but nonetheless punishing section before giving way to Emerson’s cascading keyboard work and Lake’s cries. From there, the trio wastes no time in opening up into an instrumental break. Emerson spins winding organ lines with and proceeds to quote Bach’s French Suite No.1 in D Minor in a rare (for the genre) instance of appropriate, terse classical integration; incidentally, the song’s opening/main theme had been derived from the introduction in Janáček’s Sinfonietta. Never digressing completely, Emerson is conservative enough to render a memorable, effective solo and then slip away, only for the band to come bursting in for a final visit a moment later. Fittingly, the recording ends with an actual explosion, which is about the only thing that could have outdone the group at this point.

An all around blistering effort and adequate excuse for Emerson’s rather indelicate approach to his keys on stage, “Knife Edge” solidifies Emerson, Lake & Palmer‘s stature among the group’s most accomplished outings with a somewhat more accessible style than might be expected. Rarely would ELP revisit such heavy overtones for its ensuing albums, with lengthier suites (presaged by “Take a Pebble” and “The Three Fates”) and the occasional acoustic showcase supplanting straightforward rock efforts like “Knife Edge”, albeit to great success. The song, however, thoroughly belies the criticisms spewed over the band’s subsequent work with a force that even the revolutionary children of 1977 could not have contested.

“Knife Edge” first saw official live release on 1979’s In Concert (later expanded and re-released as Works Live), receiving the orchestral accompaniment employed on the 1977-78 Works tour. Less frequently performed after 1970, many of the most compelling versions come from the group’s earliest tours as evidenced in the professionally-filmed 1970 Swiss and German (Beat Club) performances featured below.