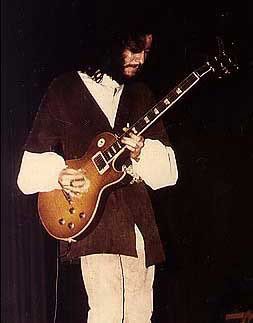 Released on Fleetwood Mac’s seminal Then Play On in autumn 1969, “Rattlesnake Shake“–a Peter Green ode–instantly took its place as a defining cut for the group. A groove-heavy excuse for wide-ranging, lengthy improvisation, the song featured as an increasingly vital part of the live sets and allowed for arguably the best exhibitions of the musicians’ collective and individual talents. Given its basic but effective structure (rarely has shifting into an A chord sounded so engrossing) and subject matter, the track unsurprisingly found acceptance in the gracious arms of numerous future rock heavies, particularly in America. Most notably, Billy Gibbons and the dual threat of Joe Perry and Brad Whitford adopted the song as an instrumental vehicle early in the respective careers of ZZ Top and Aerosmith. The song’s loose frame provided the bands the opportunity to rehearse and develop material on stage, some of which might eventually find its way onto a studio album. In the case of Aerosmith, the outro section to Rocks‘ “Rats in the Cellar” can be traced directly to jamming on “Rattlesnake Shake”. Overcoming any slightness in length or complexity, “Rattlesnake Shake” managed perhaps the greatest influence of any Green-era Fleetwood Mac composition–it may have helped that it was easier for bands to tackle than “Oh Well”–in serving as a precursor to the harder blues-based exercises that would come to dominate rock in the 1970s. Additionally, the studio recording conveyed the band’s full force in under four minutes without relying upon virtuoso solo breaks, heavy production, or an abandonment of the blues.

One of the most conservative renditions, abbreviated presumably for television broadcast, exists in fair quality. Remarkably, Green can almost be seen soloing:

A more representative version, one of two released on the Live in Boston set, comes from the Tea Party in 1970:

Aerosmith’s rendition, officially released on the Pandora’s Box compilation, dates to a 1973 taping for WKRQ in Cincinnati. The session also supplied Rufus Thomas’ “Walkin’ the Dog” for the box set and, along with the Paul’s Mall Boston broadcast from the same year, presents Aerosmith as a professional, driven entity ready to erupt. Remaining tight throughout, the group offers a glimpse at a rarely-heard yet accomplished aspect of its sound and overall musicianship. The nascent “Rats in the Cellar” rhythm kicks in at 4:42.

The group also brought out the number, with Joe Perry sharing vocals, at its 1977 Houston Summit show, as preserved on close-circuit video. Missing the first verse, the recording cuts in at 55:13.