By 1976, ZZ Top had established itself as an American commodity to rival Aerosmith and Lynyrd Skynyrd for quality and sheer likability. Having scored a pair of hit singles in “La Grange” and “Tush” and released three of its most convincing albums in as many years, Texas’ finest rock band rapidly built a reputation on compelling blues-based compositions and began to assume national and, shortly thereafter, international stature. This ascent to superstardom arguably had to overcome a brief slip with 1976’s Tejas, the group’s fifth album. 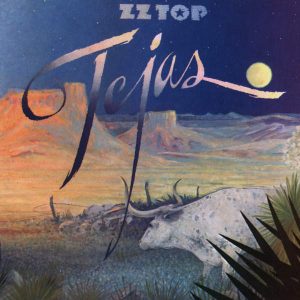 Released during the historic Worldwide Texas Tour, which would ultimately run for nineteen months and roll across the U.S. several times over, the album did not emerge from the most favorable recording conditions. With only a three-month gap between two major tours, the group managed enough time and inspiration for an LP, yet the resultant disc failed to produce a Top 40 hit or any widely-celebrated (by radio) album tracks. If anything, the band actually managed greater versatility on the record, touching on every aspect of the ZZ Top “sound” while maintaining the previous albums’ standard for musicianship. The deciding factor, it seems, came down to the fact that Tejas leaned nearly as heavily on relaxed boogies and country as Rio Grande Mud had on blues. This, in itself, would not have raised suspicions for any other band subjected to the label of “southern rock”, but ZZ Top had found success in largely eschewing straight-out country and loose jams in favor of Texas blues and the occasional hard rock assault. Taken alongside stylistically-similar works from acts such as The Marshall Tucker Band, Tejas was not without its merits, offering relative consistency and still providing a healthy selection of straightforward rock cuts (most notably “Arrested for Driving While Blind“, “It’s Only Love”, and “Ten Dollar Man”). The acoustic country outing “She’s a (Heartbreaker)”, Spanish-tinged instrumental “Asleep in the Desert”, and singular, blues-adjacent “El Diablo” filled things out well with broader sounds, but the album marked a departure in mood and relied far more often on relaxed atmospheres and pleasantness than the group’s history would have suggested to the average record-buyer. Even the more acclaimed tracks generally did not match songwriting expectations, and the album digressed sharply from Fandango!, which had represented the culmination of the group’s work up to 1975 and featured a defining sound that ZZ Top would, as it happened, never really revisit. 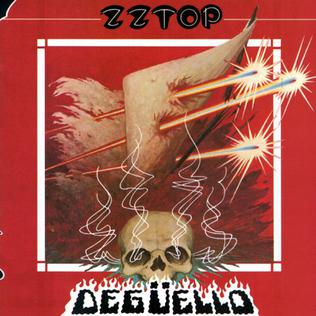 1979’s Degüello, by comparison, proved far easier to accept as a sign of ZZ Top’s maturation. It helped that the album sported more (ostensibly) comfortable material in “Dust My Broom”, Sam & Dave’s “I Thank You”, “Lowdown in the Street”, and “Fool for Your Stockings“, which would replace “Blue Jean Blues” as the brooding slow blues in the setlist. Rather than take the overdriven “Tush” approach to the recordings though, the group adopted a smoother overall sound. Consequently, the tracks took on a slightly more soulful atmosphere, while the music itself continued to diverge from ZZ Top’s previous work, most overtly in the use of horns and the deliberately-unusual but effective “Manic Mechanic”. This somewhat slicker production would return on the ensuing El Loco album before irreversibly taking over on Eliminator. Only “I’m Bad, I’m Nationwide” proceeded directly in the “Heard It on the X”/”Nasty Dogs and Funky Kings” mold, though this too showed a development in style and portended one of the group’s favorite tactics in the 1980s by breaking into a driving, minor-key solo section in its final minute. “Cheap Sunglasses” saw the full fruition of the group’s progress, incorporating noticeable but restrained production, an undeniable main riff, two strong instrumental breaks, and a grooving outro replete with Gibbon’s choked, stuttering guitar lines. Throwing in a slight funk influence and ring-modulated guitar sirens for good measure, the song emerged as a candidate for ZZ Top’s finest studio recording and remains so today.

It is from this transitional era, incidentally, that the only pre-Eliminator live recordings of ZZ Top have been taken. Double Down Live DVD (2009) presented the group’s 1980 Rockpalast broadcast in its entirety, albeit a bit behind schedule. The accompanying Live in Germany 1980 audio release marked the first ZZ Top live album recorded before 2007, yet it excised such staples as “Nasty Dogs and Funky Kings”, “I’m Bad, I’m Nationwide”, “Beer Drinkers and Hell Raisers”, “El Diablo”, “Tube Snake Boogie”, and “Just Got Paid” to condense the momentous event to a single disc. No follow-up live document, perhaps containing something recorded between 1975 and 1980 or at any point in the 1970s, has followed. Just as cruelly, excerpts from the King Biscuit Flower Hour-taped show at Passaic’s Capitol Theatre in 1980 saw release on the expanded editions of Tres Hombres and Fandango!, gracing the public with “Waitin’ for the Bus”, “Jesus Just Left Chicago”, “La Grange” (edited), “Heard it on the X”, “Jailhouse Rock”, and “Tush”. A longer recording circulates unofficially and even surfaced on the semi-official Fuego a El Paso, though with no discernible production and no availability to U.S. audiences. Thus, no proper live album from ZZ Top exists. Hope remains, however, as it has been theorized that Texas state congressional measures may lead to a confiscation of all existing concert tapes and a court order mandating that a suitable two-disc live album be produced before “Legs” racks up another 60 million plays.